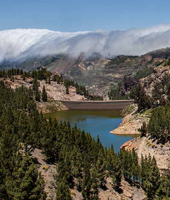 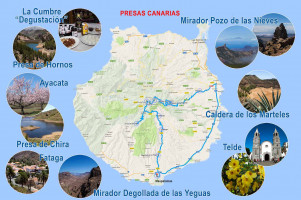 Telde. The second most important city on the island. It is essential to visit the Barrio de San Juan, which constitutes the founding nucleus of the city. Around the primitive Church of San Juan Bautista and the Plaza Mayor, another historical place of great cultural value is the Barrio de San Francisco, where the curious visitor will immediately understand that the neighborhood as a whole is much more than a small conglomerate of narrow streets in the city of Telde.
The Caldera de los Marteles. We will make the second stop at the edge of a volcanic caldera, at about 1,530 meters high, it is a landscape created by a volcanic eruption, one of the great treasures of this nature reserve.
Snow Peak. The highest viewpoint in Gran Canaria, from where you can discover this small continent. I know you can see the Roque Nublo, one of the most emblematic natural spaces of the island, El Roque Bentayga, the Tejeda caldera, and if the day is good you can see the Teide of Tenerife, the largest volcano in Spain.
The Cruz of Tejeda. It is a mountainous area in an environment of great beauty, notable for the magnificent views over the island and for a large stone cross "La Cruz de Tejeda" that presides over its 17th-century entrance and which marks the geographical center of Gran Canaria.
Fataga. In this town, a landscape of palm trees and Canarian pine coexists, something unusual and worth seeing. A town where several houses preserve their traditional Canarian state, with its spectacular views of the mountains and the valley of a thousand palm trees. You cannot miss a visit to this beautiful Canarian town.
The Viewpoint of the Degollada de las Yeguas. It is one of the most special places in all of Gran Canaria, a unique, extraordinary and particular landscape of the entire Canary archipelago. The entire territory of this area is part of the Gran Canaria World Biosphere Reserve.
Select your rate
Tarifas por zona
Loading...
Return
360º
Summary
Total: € Continue
Description

Gran Canaria is a small, great continent where spaces of great beauty are mixed. The island located in the Atlantic Ocean has a heritage of enormous natural wealth. Visit the natural park of Roque Nublo and admire the spectacular views it offers. Discover a hidden jewel of nature.

Ofrecemos recogidas para acudir a los siguientes lugares para esta experiencia:
We request your permission to obtain statistical data of your navigation on this website, in compliance with Royal Decree-Law 13/2012. If you continue browsing we consider you accept the use of cookies.
Accept | More information

You have exceeded the maximum number of tickets for this session.

You have exceeded the maximum number of tickets for this rate.